#20 The Journey; Not the Destination

Did over a year just zoomed by or what!

I meant to update my journals many times over but the amount of distractions that occurred were considerably high. I know that’s not enough to garner a reasonable excuse to have neglected updating “Ink Spills of My Heart” though… But! Better late than never, I’d like to think.

Just going through my last post, I can still recall the feeling of excitement and nervousness prior to the release of my first single《FLY》. After the release, I truly meant to update my journals to record down the outcome but I kid you not, I still cannot believe that it has been a whole year since I released my first single here in Malaysia.

Since I didn’t dare carry any expectations, I still don’t know how to feel about the response of the release. Truth be told, it wasn’t mind-blowing or ridiculously life-changing but boy, have I learnt a tremendous amount more about the industry I’ve delved into throughout this time.

I can confidently say that I am super proud of the song and music video we’ve worked on that has been released but it’s clear enough to say, with the outrageous amount of content out there, it’s so easy for great content to be lost amidst other even greater content. This is where digital marketing is so important. This observation is based on the response my single has received in the one year it has been put out there.

Over 125,000 views on YouTube, without any digital advertising and even better news yet, an award from Neway Karaoke Box Malaysia for best music video, I really can’t say I’m disappointed!

So personally, I do feel that it’s a pretty good start. Some would say it’s great results and some would argue it deserved better exposure. But we did want to see our organic reach with the type of content we produced and now that we have collected a year’s worth of data and experience, we’re hoping for better results for the EP Album release!

Throughout this year, I’ve been adjusting to my life back in Malaysia and Singapore and when you’re working 2 markets at once, it can get pretty busy. Also, I feel almost as though I am starting again as I have entered a new market (the Chinese market is a whole different world from the urban one, you guys). This is the reason why it’s more difficult to truly thrive in Asia as a notable artiste– it boils down to language barriers. If Asia or even just our nation/region spoke the same language, local celebrities could truly thrive. Unfortunately, in Malaysia and Singapore, while the multi-cultural elements make us unique, it is also one of the largest barriers for creative work to get its maximum exposure for recognition. But this is a whole other topic.

Anyway! So with having to hustle from the bottom (getting to know my new peers, directors, producers and people within the Chinese scene) and on top of that, keep up the presence within the urban market (my bread & butter at the moment) truly is time consuming.

Hence, this readjustment from one geographical location to another (Shanghai > KL & Singapore) plus from moving from the urban market to the Chinese market, suffice to say that they make for a reasonably huge distraction for the reason why my second and third music video and EP Album release has been delayed.

The great part however about this delay is that we (my manager and I) are meeting more and more amazingly creative & influential & successful people especially in production in hopes to work together to produce even better work! So although delays and procrastination can get really frustrating and I felt as though some momentum was lost, knowing I did not stay idle during this time is a sizeable consolation prize to me.

I’ve never been one who wants to become famous for the sake of being admired, revered and showered with compliments. I’m not saying I don’t want any of that completely and we all know fame can be used for many advantageous purposes (money, cool experiences, shortcuts in life, etc) but I am still as stubborn as I was before.

I refuse to be famous for the wrong reasons. I might have said this before but I’ll say it again: If fame only came with having to lose my values and my righteousness, and in order to achieve what I set out to do in the beginning of my journals and my journey I will have to go down a road I’m not comfortable with, then this fame I seek holds no value to me.

It is starting to become more and more apparent to me that the success I seek; is not temporary fame (I’d like to call it “Fireworks” because as we all know, they are a burst of magnificence but as quickly as it appears; it disappears); but longevity in this line of work. As much as I yearn for my “lucky break” and truly, I have always gotten so close but missed it several times due to various circumstances, these missed opportunities have humbled me tremendously and have been the best character building process in which value is only attainable through experience.

Having said all that, as much as it is better on my person to undergo challenges and struggles before achieving empowering success, it will still be pretty foolish not to set some sort of deadline of when it’ll be time to pull the plug. In my mind, I’ve set an estimate of when this time would be but ultimately, the decision to do it has to be made when it blatantly calls for it… and when that time comes, I’m sure I’ll know it.

2018 will officially be the 5th year of my journey thus far. A couple of exciting things for me to look forward to for the first quarter of the year (my big screen movie debut and the official release of my EP album), which may or may not dictate how the rest of my year will look like (or life… who knows with this industry, right?).

So far, there isn’t really any expectations set other than always doing and giving the very best I can and leaving it all in God’s hands. In my opinion, this is the best mentality to adopt to keep ourselves not only focused in the work we do, but stay sane in this ever-evolving and dangerously volatile industry. 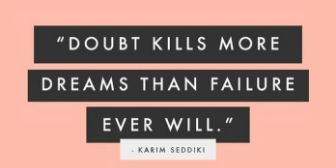 Coming from someone who experienced a bunch of failures throughout my journey, I couldn’t agree more with this 👆

Optimism and hope are the biggest tools to making our dreams come true! These words may not hold as much weight coming from someone who has only achieved small successes but here’s the optimism of hoping that it will someday 🙂

I really need to kick the 1 year 1 log habit of journaling or I'm...

10 months ago, I made the move to the charming city of Shanghai. It’s incredible...